The next version 2.8.0 named “Coridian” is finally here!

This version fixes many bugs, has multiple small improvements to the user interface and and has a massively improved TV scraper.

MediaElch’s TV scrapers have been rewritten from the bottom. This makes it possible to distinguish episode details from TV show details. Don’t want to load the episode’s overview but the show’s overview? Now it’s possible!

We have also improved the integration of IMDb as well as TMDb.

Kodi already supports TMDb for TV shows but MediaElch did not. With the new TV scraper functionality we’ve also added support for TMDb. Use their blazing-fast API for scraping your TV shows became a lot easier.

The custom TV scraper now depends on TMDb. We load IMDb and TheTvDb IDs from their site. So please be aware that shows must be available on TMDb for it to work.

We restructured the user interface for scraping TV shows and episodes. The right side now distinguishes TV show details from episode details.

Details are only selectable if the scraper supports them and if you have chosen an update-type which uses those details. For example you won’t be able to select episode details if you only want to update the TV show. 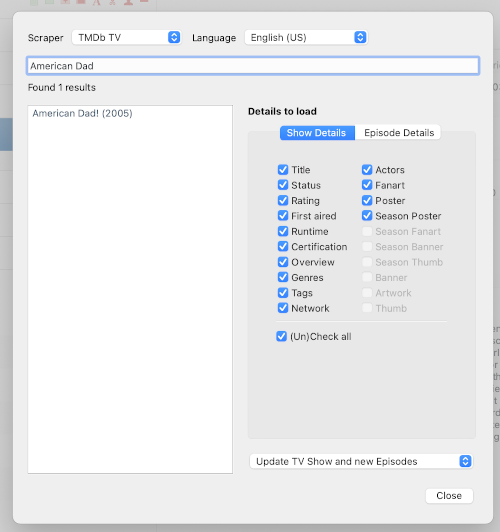 Note that some scrapers need to be initialized before they can be used. MediaElch does so automatically but if experience issues when you scrape your shows, have a look whether the scraper is initialized. 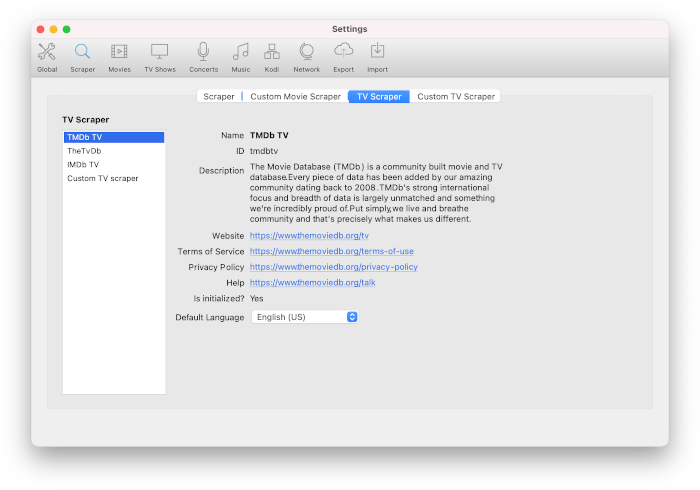 TheTvDb has switched to a paid subscription model and has released a new API which is not supported by MediaElch!

This means that starting January 2021, scraping from TheTvDb using MediaElch will fail.

Whether we integrate their new APIv4 or not has not been decided, yet. But if you are interested, please let us know! Just leave a comment in one of the forums mentioned below.

Thanks to all users that reported issues, we were able to make MediaElch more user friendly.

For example a TMDb ID field is now available in the user interface for movies and you are able to filter movies by this ID. New placeholders have been added to the renamer and exporter. You can now use random screenshots as movie’s backdrop/fanart.

More bugfixes and small improvements can be found in our changelog.

There are some known issues. We will fix them in the near future.

Stable releases can be downloaded from https://mediaelch.github.io/mediaelch-doc/download.html For Linux distributions we provide repositories for Ubuntu (.deb) and openSUSE (.rpm).

Where can I get help?

If you find a bug, please open an issue on https://github.com/Komet/MediaElch/issues

Yes! Every kind of help is welcome. You can translate MediaElch or develop and fix some bugs if you know C++. If you find any bugs, please report them on GitHub.